The Storm Bolter and Powerfist

If all else fails, hit it with a powerfist

Here is the list I am bringing to the tournament

This leaves me with 30 pts to play around with. I might put extra armor on the Crusader to make sure that it can keep moving and instead of lightning claws I may mix in some heavy flamers or chainfists.

The dreadnoughts will sit back in cover and pick off transports and the Crusader will spearhead the assault.

The terminator command squad will ride in style aboard the crusader moving forward to engage in assault as quickly as possible. The two God Hammers role will adjust depending on the configuration of my opponents. I may keep one back and deepstrike on terminator squad to pressure my opponent early (Death Wing Assault guarantees half of your terminators in reserve for deep arrive on turn one)

Melta spam - sit back and pick-off melta transports
Dakka Spam/Missile Spam- they follow the crusader and bum-rush the gunline.

Not too much shooting going on in this list aside from the two dreads and 4 twin-linked lascannons, but that has always been my style of play.
Posted by Oanue at 9:15 AM

A Proud Member of Battle For Salvation 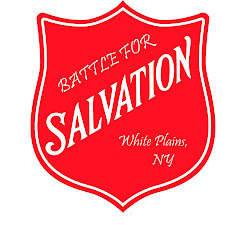 Oanue
The names Oanue(pronounced a-new with the O being there for decoration) and yes four of the five letters in my name are vowels.I've been playing Warhammer 40k for a little over 2yrs and think this is the best hobby I have ever taken up aside from playing sports.I am currently working on a Deathwing Army and finding ways to survive in the rapidly changing 40k environment